Not all heavy, painful periods are due to fibroids!

Not All heavy, painful periods are due to fibroids!

Not all heavy vaginal bleeding and painful periods are due to fibroids. Have you ever heard of or been told you have adenomyosis? Adenomyosis is a condition in which the normal lining of the inside of the uterus (which comes out every month as your period) grows within the muscle wall of the uterus. Once within the muscle it can continue to grow and respond to hormonal stimuli like normal lining of the uterus, leading to inflammation, scar tissue formation and symptoms. Women with adenomyosis often report very similar symptoms as those with fibroids: heavy, painful periods, and an enlarged uterus.

(Figure courtesy of Mayo Foundation for Medical Education and Research)

It is thought that around 20-35% of women have adenomyosis and it appears to be more common in younger women, those whom have not had children, and those with a history of prior surgery to their uterus. The only way to definitively diagnosis that someone has adenomyosis is with surgical removal and examination of the uterus by a pathologist. However, there are exam findings and tests that can be performed that help make the diagnosis.

The most important step to evaluating a patient for adenomyosis is a good history and physical exam. Sharing with your doctor information on period related pain and menstrual bleeding is the first step. Your physician will likely want to perform a pelvic exam as well. On exam, they are feeling for a large, globe shaped, soft-feeling uterus. Since uterine fibroids can also cause pain and bleeding, in addition to making the uterus feel large, imaging is often necessary to help solidify the diagnosis of adenomyosis over uterine fibroids.

A transvaginal ultrasound is the gold-standard for evaluating the uterus for fibroids and adenomyosis. On the ultrasound, the radiologist is looking for several signs that may indicate you have adenomyosis. Classically, in patients with adenomyosis, the muscular wall of the uterus is asymmetrically thickened with these invading bits from the normal inside uterine lining. The back side of the uterus tends to be thicker than the front side, for whatever reason. A radiologist can also tell that the wall of the uterus appears to be more “heterogeneous” or blurry in appearance. In the same way the lining of the uterus grows and bleed, so do these islands of invading cells within the muscle, giving it this characteristic appearance. All of this thickens the muscular wall of the uterus and makes a normally well-defined border of muscle/lining, blurry and poorly defined. 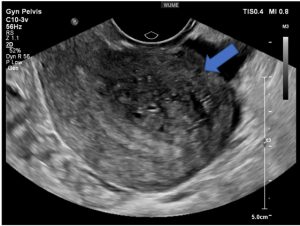 Sometimes, these islands of invading cells can get quite large and grow into cysts. These are called adenomyoma’s and can often look like fibroids on ultrasound. It is not unusual for your doctor to ask for an MRI of the uterus to help make this differentiation, particularly when considering treatment options. Lastly, biopsy of the lining of the uterus (endometrial biopsy) is not usually required in the evaluation of adenomyosis but may be useful if fibroids area also found or your doctor is evaluating other causes for bleeding.

So how do you take care of patients with adenomyosis and who needs treatment? Patients who are done with child bearing are often recommended to have a hysterectomy by their doctor. Hysterectomy, however, is not the right option for every patient and carries risks of infection, injury to surrounding organs, and bleeding. Luckily, there are several other uterus sparing options such as uterine artery embolization, endometrial ablation, and targeted laparoscopic resection of adenomyoma’s (large cyst’s formed by adenomyosis) available.

Uterine artery embolization is a procedure in which the blood supply to the uterus is reduced using small beads to occlude the vessels feeding the uterus and thus the adenomyosis. Under anesthesia, an interventional radiologist uses an artery in your groin to access the major vessels feeding your uterus. If you can reduce blood supply to the uterus, you can minimize bleeding and growth of adenomyosis. Most physicians do not recommend this for patients who still desire to have children as it may interfere with the ability to conceive and carry a healthy pregnancy.

For patients done with child-bearing who want an even less invasive option that provides symptomatic relief of bleeding, an endometrial ablation is another alternative. Under general anesthesia, a surgeon uses a camera to look through your cervix and inside the cavity of your uterus. Once inside, the surgeon uses a device to deliver thermal energy to the lining of the uterus so that it can no longer grow and bleed. It does not treat the adenomyosis directly but helps to create scar tissue within the uterus to minimize bleeding. This is often a temporizing option for women who are nearing menopause and experiencing heavy bleeding. For patients with adenomyoma’s (large cyst’s formed by adenomyosis) who are trying to conceive, your surgeon may discuss surgical removal. This is a highly technical procedure so should be done by someone with plenty of experience.

For those interested in non-surgical procedures, the mainstay of medical management are hormonal medications. Similar to the treatment of endometriosis and fibroids, the use of oral birth control (either combined or progestin only options) or intrauterine devices (IUD’s) are first line options. The goal of either option is to reduce the amount of bleeding you are having and improve your pain symptoms. However, these treatments only work as long as you are taking them and several women may not be candidates for estrogen containing pills or IUD’s (particularly if misshapen cavity due to fibroids). Your doctor can help make this decision with you depending on your goals and medical conditions.

If you have been given a diagnosis of adenomyosis or concerned you may have it, talk with your doctor! Share with them what you are feeling and how it is affecting your day to day. Ask about treatment options that are consistent with your short and long-term goals for symptom control and child-bearing. If considering surgical treatment, make sure you seek out a high-volume, experienced surgeon. Partner with your physician to find the best treatment option for you.

The Fibroid Foundation is here to help!

Dr. Pietro Bortoletto is a fourth year resident in Obstetrics and Gynecology at the Integrated ObGyn Residency at the Brigham and Women’s Hospital and Massachusetts General Hospital. His clinical interest is in reproductive medicine and reproductive surgery. He will be starting a fellowship in Reproductive Endocrinology and Infertility at Weill Cornell’s Center for Reproductive Medicine in 2019.

Cancel reply
We use cookies to ensure that we give you the best experience on our website. Ok